The October, 2022, issue of Forbes Magazine had a 12 page 'custom advertising section' extolling "The Business of Net-Zero".

The advertisers opine that, "It's increasingly clear that realizing a pathway to 1.5°C of warming will also involve removing carbon dioxide from the atmosphere." Stating, "The solution growing in popularity is bioenergy with carbon capture and storage (BECCS), what the IPCC calls a 'savior technology." They observe that "...BECCS represents a trillion dollar market opportunity." (Remember when Al Gore said that would take $100 to $150 Trillion to prevent global warming? No wonder that he wants to deal carbon credits!)

Advertisers suggest that, "Carbon trading can be an increasingly lucrative opportunity for businesses and climate finance is a crucial part of driving the world further along the pathway to net zero." Groups are already working to develop a commodities market for carbon trading. They explain that net zero is, "about so much more than avoiding emissions."

That 'so much more' is a redistribution to peoples 'at the bottom of the pyramid' like sub-Saharan Africa and Brazil. These regions are not amenable to BECCS because it is capital intensive and takes too long to build up a biomass to see a difference in carbon emissions. These regions would be funded to not deforest their lands -- a credit for doing nothing. And the idea of third world reparations for past climate damage is meeting significant resistance from China and the  UK. Some even call demands for 'climate reparations' laughable.

Without belaboring the point, the above capsule explanation of net zero also explains the underlying motivation for corporate ESG policies. ESG will provide a trillion dollar windfall for Wall Street financiers. For those interested in a more expansive description of net zero, an extensive roadmap is available. To demonstrate the extent that changers are interested more in carbon trade than carbon reduction, one need only review the COP27 position on Hydrogen fuel systems. While hydrogen system exhausts are completely carbon free (2H2 + O2 = 2H2O;  water is the only exhaust, TOTALLY Carbon free), COP27 warns, "'Indiscriminate use of hydrogen' could slow the energy transition". And, "The energy transition can broadly be seen as a shift away from fossil fuels to a system dominated by renewables. Given that it depends on a multitude of factors – from technology and finance to international cooperation – how the transition pans out remains to be seen." The underlying message being, don't mess with our Trillion dollar carbon trade market.

But this is not an expose on ESG. Ipsism has nothing against capitalism and taking advantage of expanding or created markets. Buy, then sell higher has been practiced since the dawn of mankind, whether it was animal hides, tulips or the latest IPO.

Ipsism believes in science and truth. Science necessitates evaluation of all available variables to arrive at truth.

The greatest fault that Ipsism has with the climate change proponents (changers) is that they select data to prove a preconceived conclusion rather than deriving a conclusion from data garnered.

For changers, the fault is that they ignore natural release of carbon and assume that it is steady and unvarying: leaving all change in atmospheric carbon to be anthropogenic in origin.

Figure 1, from NOAA Climate.gov presents a plot of atmospheric carbon dioxide versus annual emissions. It suggests a direct correlation between CO2 levels and anthropogenic emissions.

Changers use the assumption that natural emissions are stable using the logic that atmospheric CO2 concentration was relatively stable between 1750 and 1860, and all change in atmospheric CO2 concentration since 1860 has been due to anthropogenic emissions. But it is an assumption which is not based in data, only molded to fit the preconceived theory that anthropogenic emissions are a problem. It was reported in 1996 that tundral release could account for as much as a third of atmospheric CO2, warning that, "The concern is what will happen in the future as global warming increases and melting permafrost exposes more of this buried carbon to be respired and released into the atmosphere." In 2007, MSNBC presented an 'inconvenient truth'. MSNBC reported that CO2 release from the Artic Tundra, predominantly in Russian Asia, was approximately 100 times greater than all anthropogenic emissions: http://msnbc.msn.com/id/14696694/?GT1=8506 (no longer accessible on the web but can be verified with the 'Way Back Machine'; the article was scrubbed in 2008). While it's questionable that a 100x multiple of anthropogenic emissions is accurate for the contribution of tundral CO2 release, compared to all natural emissions -- tundral release would represent half of all natural emissions -- it is probable that tundral release represents a significant fraction of atmospheric CO2 concentration.

Quantification of natural emissions is difficult as there are few studies that have examined this aspect of the carbon cycle. One study examined the change in CO2 release in Alaskan tundra. The authors, "found that the CO2 mole fraction anomaly from the land sector, dCO2, averaged over early winter (October through December) increased by 73.4% ± 10.8% during the 41 y of the record (1975−2015)."

Thus, the science, not the consensus, is that there is increasing tundral release of CO2 which may represent a third or more of total atmospheric emissions.

If one heeds the Science Website, comparison should be made to global temperatures. Data from NOAA National Centers for Environmental Information, Monthly Global Climate Report for November 2020 is taken as a reliable indicator of global temperatures. 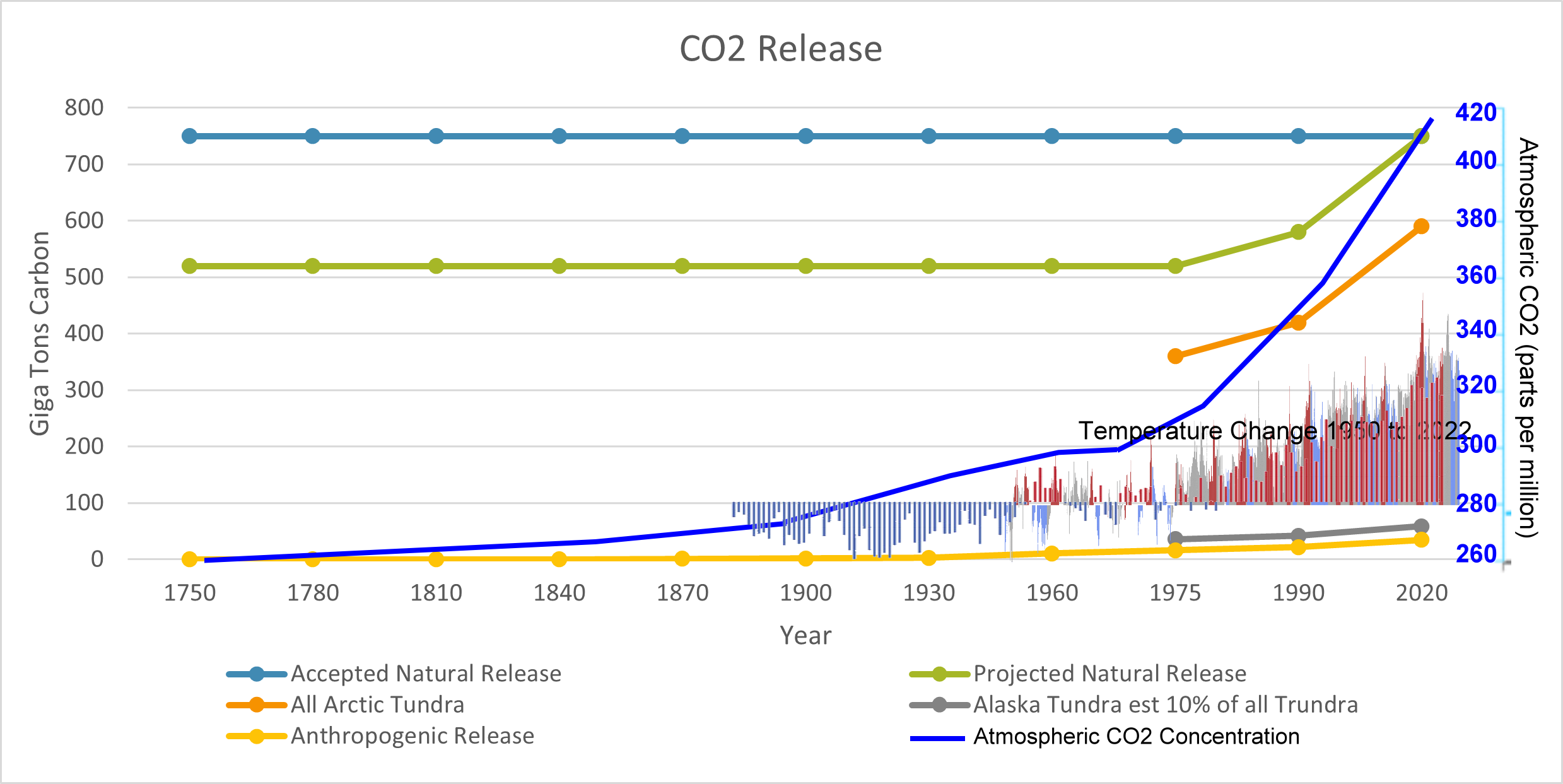 Tallying these variables lessens the selection bias inherent to only presenting data designed to achieve a preconceived consensus.

Tundral CO2 release closely parallels the increase in global temperatures.  If the global temperature is examined for a prolonged period (800,000 years) - figure 3 - today's current observed global temperatures are consistent with historical levels of fluctuation for the past 400,000 years. And just as warned by the Science Website in 1996, a natural explanation is that it represents a cause and effect paradigm where increasing temperature causes greater tundral release which overwhelms anthropogenic emissions. Additionally, it must be taken into account that over half of the earth's heat is generated by natural nuclear fission in the earth's core -- nearly twice as much energy as used by all of humanity. This fact makes it unlikely that 'net zero anthropogenic emission' is going to have a significant effect in lowering total atmospheric carbon levels as the Earth's core exothermic nuclear reactions are going to continue the cause and effect paradigm of increasing tundral release, regardless of man's intervention. Don't forget that whatever man's intervention accomplishes, a fickle environment can undo decades of accomplishment with wildfires, volcanic eruptions, oceanic variations or other trials and tribulations that nature unleashes.

Next, consider the demand for electrical energy. Not only will there be an increase due to population growth; government policies to end natural gas use for home appliances; and electrification of vehicles; are going to exacerbate the demand. It's projected that electrical demand is going to more than double by 2050. Currently, hydrocarbons supply the means of electrical production for more than 70% of energy consumed. Thus, alternative electrical sources (currently planned: wind and solar) must have a six fold increase to provide the electricity required. What are the logistics needed to supply this level of wind and solar? Estimates for the United States suggest that an area larger than New England plus several states will be required for placement of the wind and solar apparatus. Globally, "An assessment of plans from 166 countries and the European Union, released by the University of Melbourne, estimated that the total area implied was almost 1.2 billion hectares (2.9 billion acres) -- bigger than the United States, or four times the size of India." This suggests that current land-based climate plans are 'unrealistic.' Even if the area required were available, could the number of solar panels and windmills required be fabricated and operational by 2050? There are real concerns for the supply chain and sourcing of required materials.

Based upon performance to date, it is highly unlikely that a global 45% reduction in carbon emissions will be achieved. In the United States, all but the most die-heart of change advocates are unwilling to forego heating, cooling and motorized transportation. To say nothing of losing their iPhones and iPads and all the other products which require petroleum based components. And the rest of the world? China and India are definitely not currently in agreement nor participating -- asserting that they are still developing economies: exempt from restrictions and reparations -- suggesting they might comply in 2035 or 2050 -- despite China and India being responsible for almost half of global CO2 emissions. Currently, China and India are trying to lift the standards of their people to be comparable with the West. And, when the third world, such as sub-Saharan Africa and Brazil, becomes more wealthy, is it reasonable to believe that they will maintain current poverty levels and forego life style  improvements to maintain net zero carbon? All of these changes have a fundamental requirement of energy. And solar / wind sources are not going to be able to provide that level of energy.

Recently, the UN COP27 meeting on November 8, 2022, acknowledged that industry is continuing to invest in petrochemicals conceding that, "There's a global consensus toward cutting emissions by 45% by 2030, but emissions are instead expected to increase by close to 11% by then."

Lastly, net zero has not allowed for the amount of increased carbon release as the tundra warms due to natural causes. To do so would refute and discredit their model of anthropogenic release being the only cause of increased atmospheric carbon.

Using the information above, Ipsism views net zero as 'snake oil'. It sounds like a miracle. But the promised cure is never going to happen. There will be a huge short term gain for Wall Street and deal brokers, but long term pain for main street -- financers whose loans become uncollectable; common people who will live in a perpetual state of inconsistent transportation; brown outs and black outs.